I AM STILL LEARNING

In life there’s always going to be conflicts everywhere. It can either be with family, friends, strangers, and relationships. Conflicts come in all sort of shapes and sizes. The most important thing is being ready to face them when they come. However, when conflicts do arise, you must be careful how you deal with them because whatever outcome comes after that is based on your action. People make their own decisions and decide their own fate which is the idea behind existentialism.

James Brown “It’s a Man’s Man’s Man’s World.” “This is a man's world, this is a man's world, but it wouldn't be nothing, nothing without a woman or a girl.” It doesn’t matter how bad a man treats a woman, he’s still not complete without one. Women have every right to be equal. I grew up with three women and because of them I am the man I am today. My grandmother used to work more than most men I knew. There is this quote I read the other day by Gloria Steinem that says “We've begun to raise daughters more like sons… but few have the courage to raise our sons more like our daughters.” I think if Stella was raised as an individual and was taught how be strong and independent like we expect a man to be, things would have been different between her and Stanley. Stanley did not treat her with the respect she deserved.

Lucky Dube “Victims” “Bob Marley said how long shall they kill our prophets while we stand aside and look, but little did he know that eventually the enemy will stand aside and look, while we slash and kill our own brothers, knowing that already they are the victims of the situation.” This is one of my favorite verses from this song because everything he is saying is a reflection of reality. Stella is throwing Blanche out because she refused to believe that Blanche was raped by Stanley. Blanche is Stella’s blood. There is no reason she should be fighting against her. You’re supposed to help each other no matter what. Stanley is Blanche’s enemy and enjoys watching the sisters fight each other because he does not want Blanche to be there. He knows that if she stays, it will only bring trouble for both of them but mostly him. This also relates to the current state of our society because of black on black crime. Law enforcement watches and encourages black on black crime as a means of ignoring the issue.

This is very important because it doesn’t what we have or how we look. We have to love ourselves because that is the only way someone will be able to love us. With that being said, Blanche has never been the same after the death of her husband. She doesn’t feel as confident, but she wants to be whole again and have a sense of belonging in this world.

Kanye West “Waves” “Even when somebody go away, the feelings don't really go away.” Blanche talked about her husband that passed away to Mitch. She desires to be loved again, which is the reason why she was flirting with Mitch. Otis – “Try A Little Tenderness” “You know she's waiting just anticipating the thing that she'll never, never, never, never possess, yeah, yeah. But, while she's there waiting, and without them try a little tenderness. That's all you gotta do.” Blanche is trying to live in a world that does not exist. “I don’t want realism. I want magic! [Mitch laughs] Yes, yes, magic! I try to give that to people. I misrepresent things to them. I don’t tell truth, I tell what ought to be truth. And if that is sinful, then let me be dammed for it!” (Blanche, 117). Blanche knows that the things she wants will never come to reality but she chose to ignore it. Even though Mitch knows this, instead of showing her a little tenderness, he chose to laugh at her instead. A man needs a woman, emotionally and also from biological standpoint. We have to treat women better and love them better.

Lucky Dube “It’s Not Easy” “This choice I made didn't work out the way I thought it would be now I'm hurting.” We all make choices in life that have the potential to cause pain in their aftermath. For example, when Blanche was forcing Stella to leave Stanley, he overheard them talking. Stanley overhearing their conversation then caused more problems for her with Stanley because decided to get involved. The reason Blanche is hurt is because Stanley not only raped her but Stella is kicking her out. Kanye West – Featuring. Gil Scott-Heron – “Who Will Survive in America” “America stripped for bed and we had not all yet closed our eyes. The signs of truth were tattooed across our open ended vagina. We learned to our amazement untold tale of scandal. Two long centuries buried in the musty vault, hosed down daily with a gagging perfume.” This is from a poem by Gil Scott-Heron, the first verse is referring to the Quartering Act Of 1765 is when troops were allowed to take over people’s house for shelter. Without asking for their permission people were taken out of their homes. The same thing happened when Stanley decided to rape Blanche. The word perfume is used as a metaphor for covering things up. We continue to act surprised when there is police brutality, hatred, racism, inequality and more when in reality not any of them are new. The name of the song can also be a quote, and the reason I made this the last song is because we already know what happened in both plays. It’s up to us now to do better by learning something from the mistakes we have made.

Kanye West - Who Will Survive In America [Advertisement]. (2010). Retrieved March 9, 2016, from http://www.azlyrics.com/lyrics/kanyewest/whowillsurviveinamerica.html

Lucky Dube - It's Not Easy [Advertisement]. (1991). Retrieved March 9, 2016, from http://www.azlyrics.com/lyrics/luckydube/itsnoteasy.html

Lucky Dube - It's Not Easy [Advertisement]. (1991). Retrieved March 9, 2016, from http://www.azlyrics.com/lyrics/luckydube/itsnoteasy.html 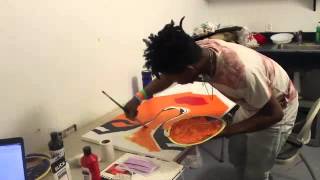 END OF THE SEMESTER REFLECTION

WHAT WILL YOUR VERSE BE? OPTION ONE

IT'S JUST AN ILLUSION

END OF THE SEMESTER REFLECTION

WHAT WILL YOUR VERSE BE? OPTION ONE

IT'S JUST AN ILLUSION